Mug Magazine deals with the history of fashion, focusing on the evolution of the craft and industry from which it stems. It is a showcase that proposes traditional and up-and-coming items, experimental and well-established articles, trends that look to the future and enhance the value of fashion.
Although Mug’s activity is often focussed on realities outside the domain of Italian fashion, it is all the more valuable since it isn’t influenced by mass culture and can equitably investigate simple and complex projects according to their historical importance and originality potential.
The Magazine’s endless travels, discoveries and documentation has led to its love for Japan, its language and culture, as Italy and Japan’s mutual admiration are rooted in their history and spirit of innovation.
Starting from this issue, Mug’s articles will appear in English and Japanese, two fascinating cosmopolitan languages which will no doubt become in the future the languages of fashion and design. Our choice was also due to our heartfelt sympathy for Japan after the tragic events of Fukushima; our solidarity and sorrow prompted Mug’s reflection and enquiry on contemporary Japanese art and its reactions to the catastrophe.
The novelties in the present issue of Mug are the token of a modernity and dynamism that look to the future while trying to improve its communicative potential for readers to enjoy. 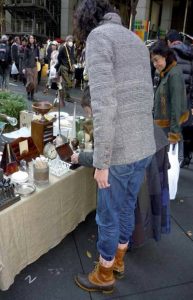