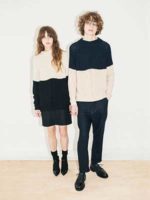 The Japanese have designed clothing all along and by so doing they have realized creative reproductions of things that have long existed in people’s daily life, as the history of the Kimono testifies.
Since it was founded in 2003, the Tokyo-based brand FAD THREE has been designing clothing drawing on the Japanese cultural and historical tradition. In Japan’s ancient history the number 3 implied coexistence, community and collaboration. FAD THREE’s number 3 is derived from the ancient 3 which they want to reproduce the 3 in today’s fashion. By combining change or trend consciousness in fashion, another element of ‘fad’, the original brand concept is completed. 3 is interpreted in the current style through collaborations with various artists and designers from all over the world, who share an aesthetic sensibility in fashion and answer the different needs of design. Each creator’s sensibility grasps the spirit of the times and converts it into fashion. At that very moment FAD THREE, a new brand based on collaboration, is completed.
By combining the revolution of the free imagination and unisex with the asymmetry of symbols, FAD THREE brings about its reconstruction in pursuit of something new which has never existed before. Every balance is considered as vision and expresses “Hybrid design of the stream in the past style”. The phrase faithfully follows the brand theme which is “Street fashion for High brand image”, which turns casual fashion into quality fashion or prestige fashion. To make this come true, FAD THREE devotes itself to the development of an original textile every season. A high quality textile suits prestige fashion and is also an essential element which allows no compromise as far as design is concerned.
The design source of the 2015 AW season is a nostalgia for the 70’s. Transformed from the present and the past fashion into the primitive elegance, the main silhouettes are “No Gender”, “New Structure” and “Voluminous”. They express a simple, luxurious, structural collection, yet the relaxing silhouette at once expresses both soft and feminine atmospheres.
FAD THREE has created a fashion which makes people feel happy because they can find a clue to communication between clothing and people. 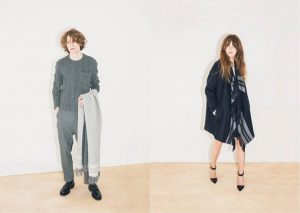 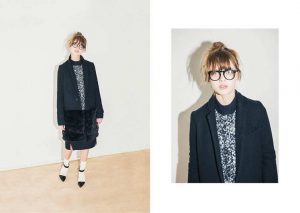