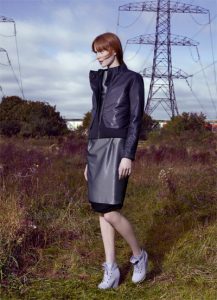 A range of styles that merge past, present and future starting from the medieval mood of Alexander McQueen all the way to the spatial inspiration of Hussein Chalayan.
Hussein Chalayan, Puma’s creative director, shows his futuristic vision in a mix of winter classics.
Men’s and women’s Allvar Mid sneakers draw on the deconstructed look of spacemen’s footwear and are proposed in an urban version through the choice of primary matter colours reminiscent of the earth. The jackets, like the Space Performance Jacket, are created on the model of NASA ones in technical waterproof breathable fabrics, with heat sealed seams and ‘laser cut’ details to move in an urban environment under any weather condition. Also WN Space Crash Windbreaker, Puma’s classic women’s windproof vest, is given a spatial reinterpretation, enhanced by original multicoloured printed patterns. Accessories mix futuristic materials and processing without neglecting practicality, like the multifunction pochette bag UM Palm, used both as a document and an I-pad holder.
The sombre medieval atmospheres, the burnished metals of suits of armour and the fabrics of banners and tapestries are the source of inspiration for the colours and materials of the Puma sneakers line by Alexander McQueen. A daring, revolutionary collection represented at best by the model Joust: sneakers which are as wraparound as a suit of armour thanks to the stitching that supports the heel and the patella fastening on the ankle. The model comes in three versions: in pony skin with leather insertions and matching colours, polished silver leather and black nappa leather. Joustesse Mid is the version created for women. It draws inspiration from the model Joust, but is more feminine and made precious by insertions in pony skin on the front and by the pony fur applied to the ankle. 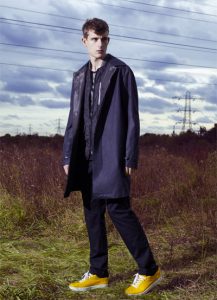