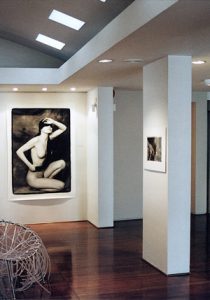 “Goods for Intelligent Lifestyle”
This is the concept behind the new Sbaiz store, which is also making its on-line debut with a new e-commerce site.
The famous Sbaiz store of Lignano Sabbiadoro has expanded its offering and set up a series of corners. The homeware corner features the Vitra, Kartell, Fornasetti, Mimmo Rotella and Fish Design brands; the high-tech entertainment corner Bang & Olufsen, and the cosmetic and perfume corner Tom Ford.
The eyewear corner is the first in Italy dedicated to Linda Farrow, and hosts the complete collection (Kris Van Assche, Agent Provocateur, Oscar De La Renta, Jeremy Scott, etc.). Work is ongoing on hair-style and flower-design corners too. The new store also boasts an extended fashion designer brand list that includes Gareth Pugh, If Six Was Nine, Issey Miyake, Junia Watanabe and Yohji Yamamoto.
The art gallery on the second floor confirms that the store’s commitment and interest in art will continue, along with the important and valuable patronage that Sbaiz has provided for over twenty-five years. The new interior is designed to host temporary shops, events, start-up projects and joint events with partner brands in a flexible and constantly evolving architectural setting.
The idea behind the store’s transformation came from Walter and Marinella Sbaiz (Art Director and Sales Director of the Sbaiz Concept Store) who have many years of retail experience and are great believers in A. Toffler’s proposition that “Change is not just necessary for life.
It is life!” especially in the digital age. Their objective was to create a path of exploration and discovery for customers, and to make shopping a seductive personal experience.
The result is a concept store packed with enough stimuli and suggestions to satisfy a whole world of expectations. 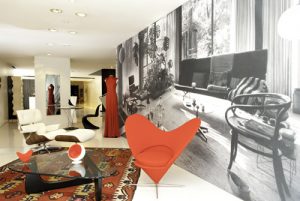 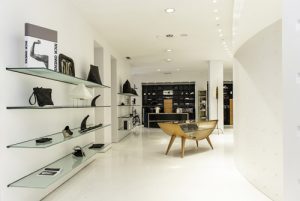