Also the shots by Yasuyoshi Chiba and Koichiro Tezuka are fascinating, upsetting and disturbing in that they break a balance. As a matter of fact, the Tohuko earthquake and the tsunami which on March 11 2011 destroyed most of north-western Japan deeply upset the whole country. The shots of the two artists, who won the 2011 World Press Photo for the section Current Events Protagonists, in the Spot News section propose a view of Japan completely different from the traditional one of an ordered, poised country. The protagonists of their shots are heaps of rubble, devastation, wrecks, destruction, the dismay and loneliness of men. Viewers feel disturbed and anxious and their feelings are magnified in Tezuka’s shots. By framing things from above he manages to catch the very moment when nature’s strength and violence take over all that man has built: houses, streets, bridges, architectural works, leaving behind nothing but chaos and annihilation.
What the two artists portray is a country that nature brought to its knees and yet still nurses some hope. Chiba portrays a woman who picks her daughter’s diploma out of a heap of rubble, and in another photo a man and a woman are writing on a wall: ‘Ganbaro!’, that is ‘Pluck up courage!’.
After all Art asserts that it is possible to hope and make a new start. 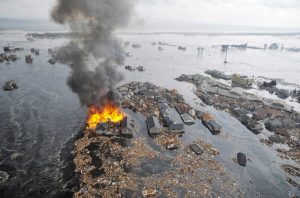