The protagonist of those years was Cocò Chanel, a self-made woman who struggled for freedom and independence. She was a sort of Cinderella who managed to make the taste of high society – to which she did not belong – accept her own revolutionary ideas. The modern woman that Chanel embodied was practical, thin, enterprising and anything but submissive: her ideal clients were unconventional young women like Jordan Baker, the golf professional player in The Great Gatsby by F. Scott Fitzgerald.
A secondary character in the novel that portrays the Roaring Twenties, in the span of a few years this kind of woman would become a benchmark in the Thirties: an individualist, autonomous and intelligent woman who did not depend on men but used them nonchalantly. Chanel was the fashion designer who interpreted the spirit of this woman starting from her earliest fortunate sports collections. No longer an object, woman was now the protagonist of her own life, like Wallis Simpson, a middle class American divorcée who gained a first-rate position in society by seducing the Duke of Windsor, a man who would for her renounce the throne of Britain in 1936.
Disillusioned, decadent men whose confidence history and events had undermined, made room for this kind of women; men who renounced their duties for the sake of peace, and refused comparison with their outstanding fathers. Along with the sober, middle-class professional men of the new society, these men looked with admiration at the initiatives of women like Chanel who relied only on their qualities for success. Cocò embodied and dressed these women through an item which was at once simple and functional: the suit, either in the jacket-skirt or the trouser suit version made of the same fabric, or the jacket and dress, all of them corresponding to a men’s suit. Born as an informal item for daily wear, the suit immediately gained success both for the freedom of movement it guaranteed and the simple care it required – unlike any classic dress – to the extent that it became a benchmark in modern fashion. 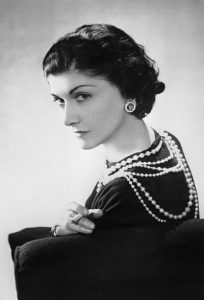 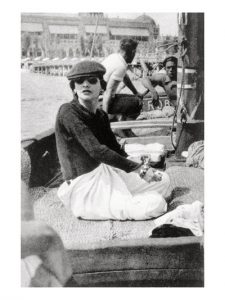