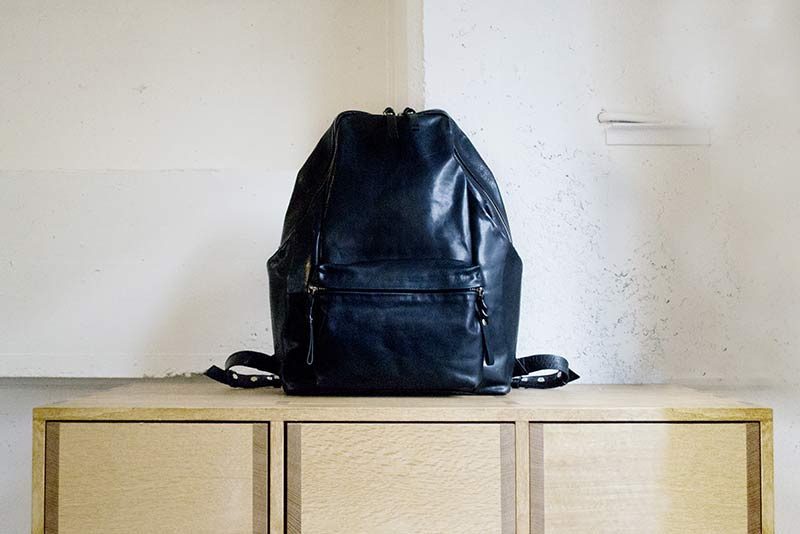 Work and production of the Cultivate Industry

Happy tenth anniversary this year!
Since established in June 2007, Cornelian Taurus by Daisuke Iwanaga at CULTIVATE INDUSTRY has been producing a bag which faithfully follows the brand concept: “Through bags and products, proposing Japanese culture overseas.” It started from a single Paris-located store, ‘L’Eclaireur’, when it was launched in the 2007 AW season, and from that moment their committed work has gradually increased and has now achieved a significant relevance with their ten overseas clients and about twenty-five domestic ones.
Bags made of high quality cowhide, horsehide and elements from ship equipments are the distinguished products of Cornelian Taurus by Daisuke Iwanaga that have led the brand to steady success in the last decade. Production is entirely made at their own studio or in factories nearby, a production system that has ensured constant high quality. In recent years crocodile and ostrich bags have been serialized, and the variation in the collection has expanded since exotic leather bags are proving  a good move  to build up a new business potential for the future.

Their first collaboration with By Walid, a London-based apparel brand, is another challenge they will face in the future. The collaboration products, which will be launched starting from the 2017 AW season, will be first presented at the pop up store on the second floor of Isetan Shinjuku Men’s from August 2nd to August 15th.
The designer Daisuke Iwanaga, who also works as an artist under the same name, and whose favorite materials are vegetable tanned leather or lacquer coated leather, has recently undertaken the design of all the amenities for the HOSOO RESIDENCE HOTEL located in Kyoto and due to open late in July. The Cornelian Taurus bag by Daisuke Iwanaga conveys a strong message and looks cool regardless of gender. That is why we feel confident that  Mr Iwanaga’s creative work, which sticks to Japanese techniques and aesthetics, will further expand in the future.