Diesel Kid: the future belongs to the little ones

Diesel look ahead and pin their hopes on children by establishing in Treviso their biggest Diesel Kid store. Born in 1984 with the name of Dieselito and re-named Diesel Kid in 1999, the line was originally devoted to the children of the Firm’s founder, Renzo Rosso, who wanted to create special, high quality clothing for his little ones. In the span of fifteen years the line has become an autonomous business unit with over seventy employees and offices in fifteen European, Japanese and American locations. The first world license with the brand John Galliano Kids was signed in 2008, and in 2011 Diesel Kid became Brave Kid, a multi-brand firm ready to face new challenges and targets. The collections designed for little children convey a feeling of global coolness expressed in exclusive communicative codes. The production has gained international renown, to the extent that besides the corners in some of the most important Diesel Stores world wide, Diesel Kid currently has single brand stores in six countries ( 20 stores in Italy, 2 in Japan – Tokyo and Yokohama, one in New York, Dubai, Marseilles and Barcelona). Furthermore Diesel Kid can be found in 2000 more stores all over the world and in some of the most important global Department Stores, like Harrods, Selfridges, Bloomingdales, Saks Fifth Avenue and Galeries Lafayette.
In 2001, the first single brand store devoted to children was opened in Treviso, followed by Diesel Kid almost ten years later. In collaboration with their historic partner Italo Lazzari, they are about to face a new challenge and totally renew the store. 220 square metres to display collections with over 600 items and 120 shoe models each season, that cover the whole universe of children’s clothing, from infants ( 3-36 months) to junior ( 4-16 years). Besides Diesel Kid the store will display also John Galliano Kids collections.The store’s aesthetics and the style of the items proposed are addressed to dynamic, brave little boys who are daring enough to explore the world, and to little girls who like to give a rock-chic touch to their sweet feminine look. A store where the blue jeans becomes the leading protagonist together with items in bright colours that combine appealing prints and comfort. The collections satisfy the need for movement of children and reinforce the identity of a brand that wants them to be lively and ‘brave’, in the Diesel style. 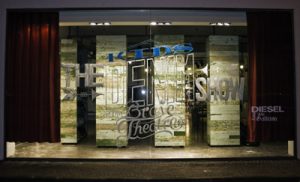 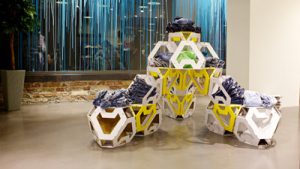