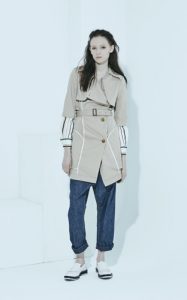 Watching, listening and feeling the four seasons.
We, Japanese tend to create and reproduce with certain colors, shapes and designs for clothing throughout our lives. For instance, the shape and design of Kimono had reconstructed and customized for their TPO. FAD THREE is the brand, which has been structured from the Japanese cultural and historical background. From the ancient Japanese history, we believe in the number of “3” as to the meaning of coexistence, community and collaboration.
The FAD THREE is based on the meaning of number “3”, inspirational art and the intension in fashion that Japanese have throughout their lives.
By combining those sources all together with the sense of four seasons set the brand as concrete. As “FAD” in FAD THREE stands for impermanent or trend conscious of fashion, while “THREE” represents its own deeper meaning to unite the brand concept.
FAD THREE was established in 2003 and has started in Tokyo, Japan. The brand has been collaborated with various artists who shares aesthetic sense of both artistic and style of fashion from all over the world. FAD THREE responses successfully until today by engaging what Japanese customer need in design, such as; offering unisex wear, combining different textures of fabrics together, featuring with unexpected categories together and harmonizing opposite materials together.
Those motivations of what FAD THREE dedicate into all the products eventually turn into the additional highlight to customer’s ordinary look. Moreover, the development of own original textiles is also the signature for FAD THREE. They are not only original but also high quality to meet each design of the garments.
Finally, FAD THREE has an intention as always to manage establishing any communication that occurs between clothing and people, which brings happiness to all the people.
thewall.co.jp/fourth/fadthree/index.html 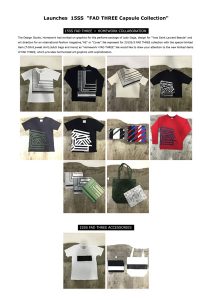 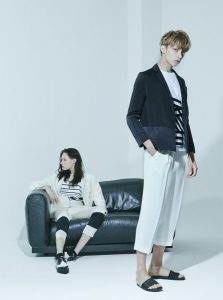