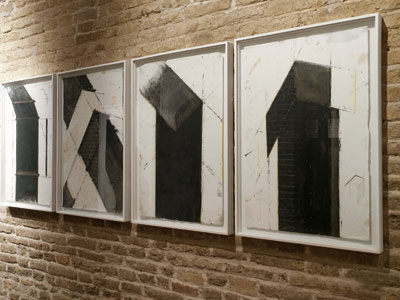 Adone Brugnerotto and Alessandro Cadamuro are two profoundly different artists whose backgrounds are so dissimilar that they can be proposed in the same exhibition. That’s what the two managers of Lazzari Space Romano Abate and Francesco Stefanini may have thought while coupling them in the exhibition Rust and Glass held from December 22, 2011 to February 29, 2012.

Adone is a painter whereas Alessandro creates glass sculptures. The former makes two-dimensional pictures in which the screws, cylinders, bolts and electric wires cease to exist to flatten out and regenerate as rust within the place-picture.

Alessandro also creates places out of glass. He handles, destroys and shapes with strength this material so as to make it become a place, a magic box, a three-dimensional container where to lodge something. At times they are letters, or sounds, at other times they are objects without a true practical function simply aimed at being visually provocative and at stimulating viewers’ imagination. Although the two artists are different both in terms of contents and materials, they undoubtedly share an urge  for absolute artistic research. 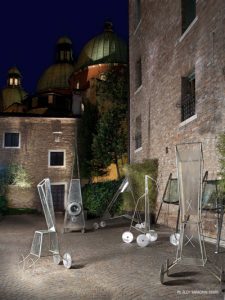