The Forms of Silence

The exhibition The Forms of Silence held at Lazzari Space from March 22 to May 31 2012 is managers Stefanini and Abate’s homage to non-figurative art, to the forms of silence that only art can express. This is the reason why they invited two artists whose peculiarity is motionless artistic expression: Giuseppe Nicoletti and Nane Zavagno.
Nicoletti’s field of action is painting. In his brightly coloured pictures he represents motionless, apparently lifeless geometrical forms. Thanks to the blue background against which the paintings are set, however, they seem to take on the liveliness of landscape forms, an effect obtained also through the chiaroscuro technique and through nature-like colour details.
Zavagno creates his sculptures in the same way, without using colours. He creates spaces, non-figurative primary polyhedrons born from the need of studying forms through various materials. He does not add, indeed he removes and reduces matter and makes its aesthetic impact lighter to create silent compositions for the yard of Lazzari Space. 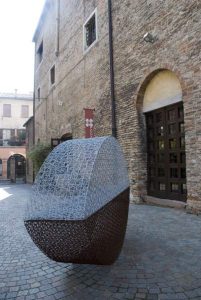 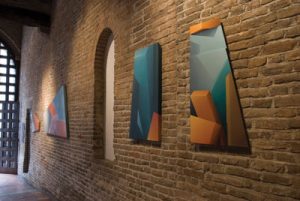