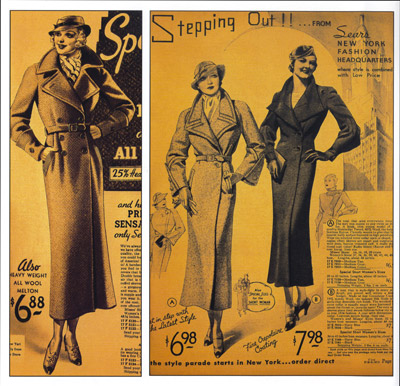 “A world was ending and a new one was about to be born. I was there, I was offered an opportunity and I seized it. I was born with the new century, and it asked me to design its clothing. What was required was simplicity, comfort, neatness: I offered the age all of this unbeknown to it. True success can be fatal”. Cocò Chanel.

The Thirties were characterised by four events which enlivened the society and fashion of the age: the rise of the United States as a new great world power, the political renewal of post-war Europe, the great Depression and the ever growing active public role of women in society. If in the Twenties the pretentious dreamlike clothing of the Belle Epoque was a way for people to celebrate their surviving World War I, in the Thirties a more austere and practical style caught on in fashion due to the new active lifestyle after the Great Depression of 1929.The decade opened with the financial collapse of the Stock Market, a punishment for men’s arrogant search for wealth, and was characterised by the enhanced social status of women who had gained in strength and independence by substituting men in industries during World War I.
The fact that Men were now defeated and seen in their true perspective, that women’s role and importance were becoming more relevant thanks to the American myth of freedom and pragmatism led to a profound evolution in society, brought about innovations in the American way of life and clothing with items that were to become true classics of modernity over the years.
Clothing mirrors the spirit of the age, and the Thirties were a complex decade of transition, an epoch in between two World Wars. The precious, glittering fabrics of the Belle Epoque were replaced by more soberly coloured ones, the shining insertions and sophisticated details gave way to a new idea of practicality, the wardrobe focussed on sculpture clothing was now renewed with interchangeable items that gave the human silhouette a new freedom.

Images: “fashionable clothing from the Sears catalogs”
A Schiffer Book for collectors. 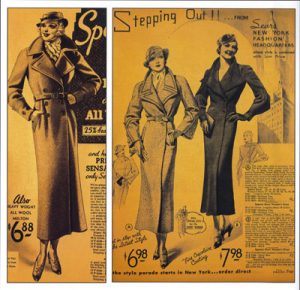